The August Voice Devs challenge meant that my partner and I had to stick to the topic: a water reminder app. While the question of "what" had already been resolved the entire rest of the project was the "how." How to design a prototype for a Google Action using a #VoiceFirst approach when only one of us owned a smart speaker? (Hint: that person was not me.)


The first step was to "meet up" on call and talk the details out over a Google Doc. Coming up with a name was easy enough since we agreed that this app should serve people around our age group and thus, the style of the language should be informal. Then came creating the happy path. For our first venture, we really went all out with the amount of features available in version 1 of this app. 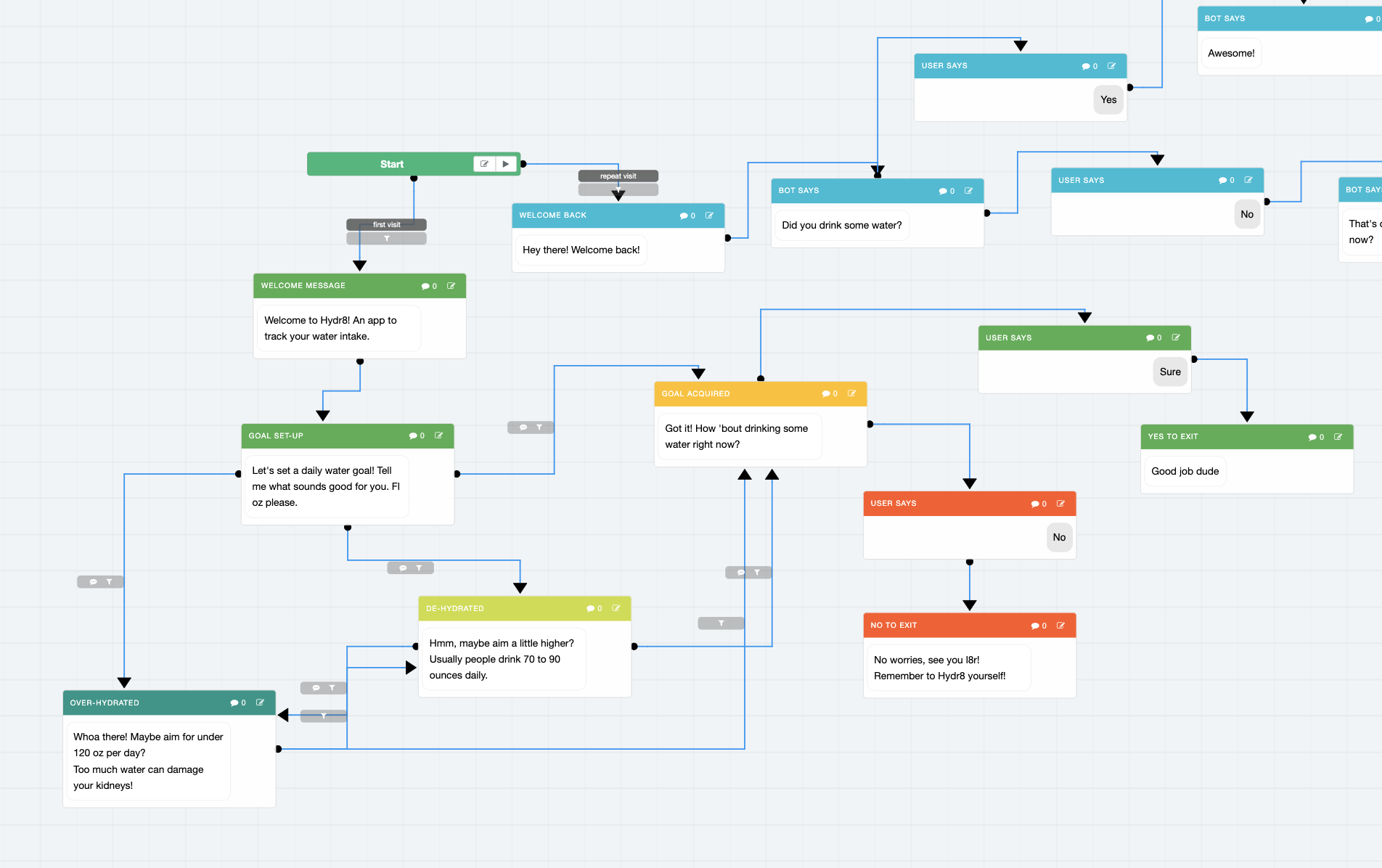 A multitude of potential paths reduced to a more streamlined process.

The only time "more features" is problematic is when you haven't stoppped to test your conversational flow yet. The shining star of our app's feature was supposed to be a way for the user to save their preferred drink container and later check in with the app with the amount of times the container was filled and drunk. Thanks to testing, we quickly found out this feature was pretty hard to design for given that people can drink water in many different forms and containers. Unfortunately, as smart as virtual assistants are, they are not yet smart enough to tackle real human conversation on their own.

"As smart as virtual assistants are, they are not yet smart enough to tackle real human conversation on their own."

Sometimes (rather, most of the time) the user is unaware the of exact measurement of their drink container. Other times, users don't fill a container (e.g. a glass) all the way to the brim, especially if they're in a hurry. Designing for all of these variables turned out to be a herculean task, so the feature was cut from the flow. 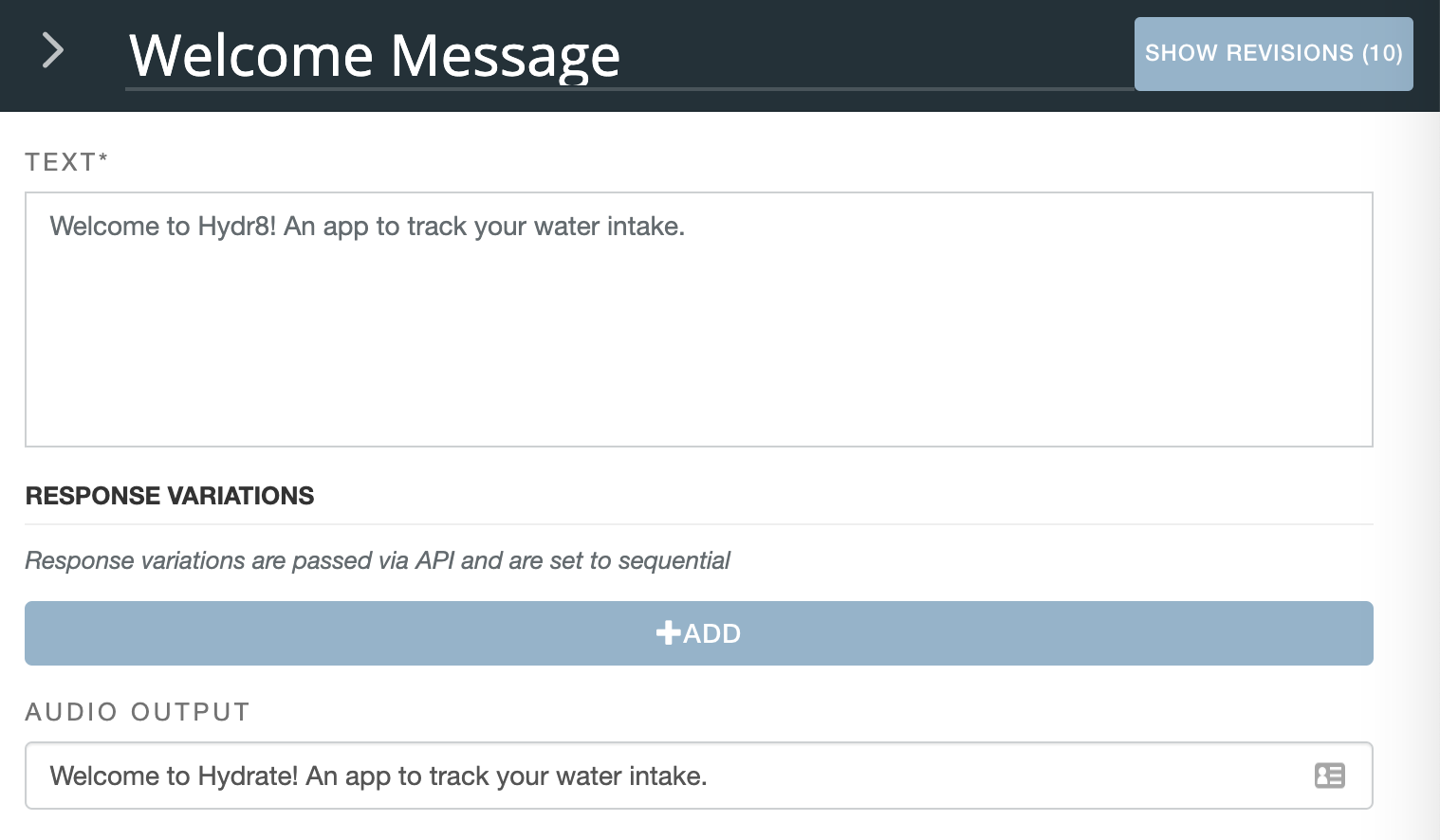 Hydr8 vs. Hydrate and why you should also test the output audio during testing.

What does Text to Speech (TTS) sound like? It doesn't sound like a good time, especially when designing for voice experiences. A common complaint people have with chatbots is that they're "too robotic." It's important to realize that any little mistake will vastly affect a user's experience with a voice app, and too many little mistakes will negatively impact retention: the voice app's greatest enemy. Early on in the process, we realized that Google was pronouncing "Hydr8" incorrectly (think: "hyder-eight" and not "hydrate"). This was easily fixed by replacing the character with the correct word in the "Audio Output" section of the Botmock block tool. However, were this name to pop up several times throughout the conversational flow and increase the amount of times the mistake could've gone unchecked, it would've been a better idea to change the name entirely. 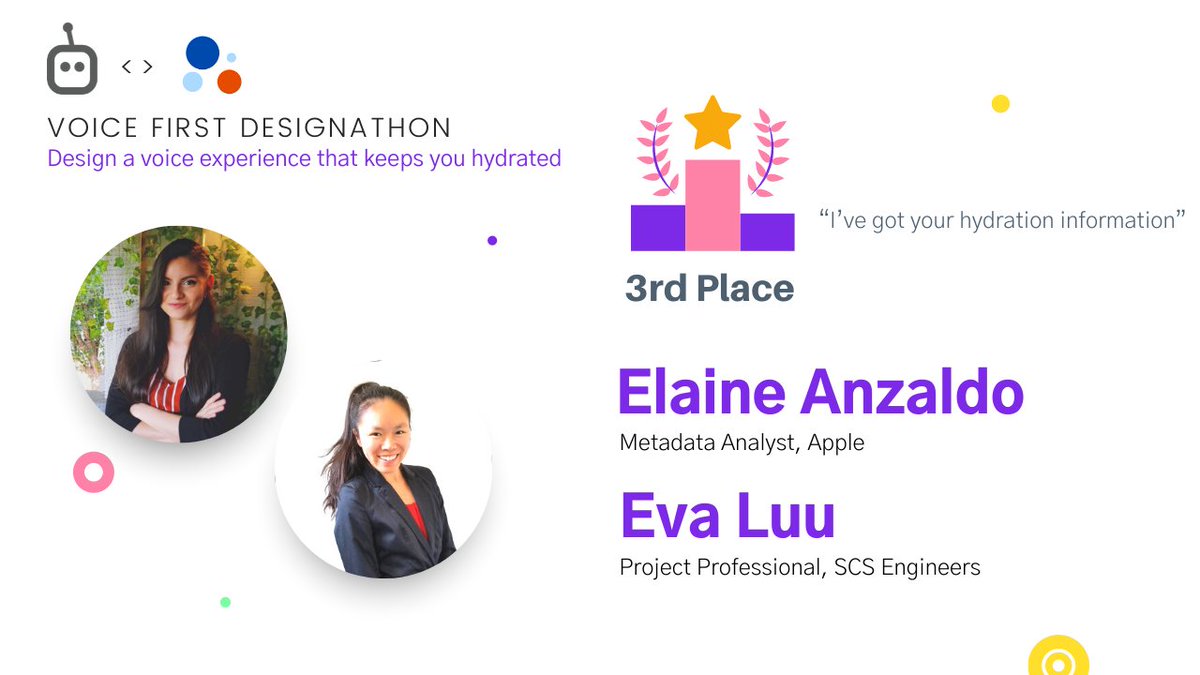 Bringing it home and why we won 3rd place.

Aspiring for retention is really the key to conversational design. The easiest way to do that in our app, was to include a first-time use happy path, and also a repeat-use happy path. We also measured against potential errors by limiting responses to the (implied) question: "Let's set a daily water goal! Tell me what sounds good for you." This was accomplished by setting custom responses to certain numerical ranges. For example, any extreme amount like 10,000 fluid ounces would be directed to a question with a more narrowed focus.


You're not a conversation designer until you've written and run through your conversational app several, several times. You can do your best to create a great chatbot experience: making sure to do a trial run of each pathway, hypothesize every utterance variation you can think of, etc. and yet you will still be amazed at what real users will think of your app. For us, although we were unable to include our shining star feature in this app, it doesn't mean the end for such a design. There may yet be a water bottle company out there, willing to enhance the hydration experience and solidify their branding by creating a water log app and encourage their customers to fill and drink from their bottle.